HISTORY OF THE KIDDERMINSTER CAMERA CLUB 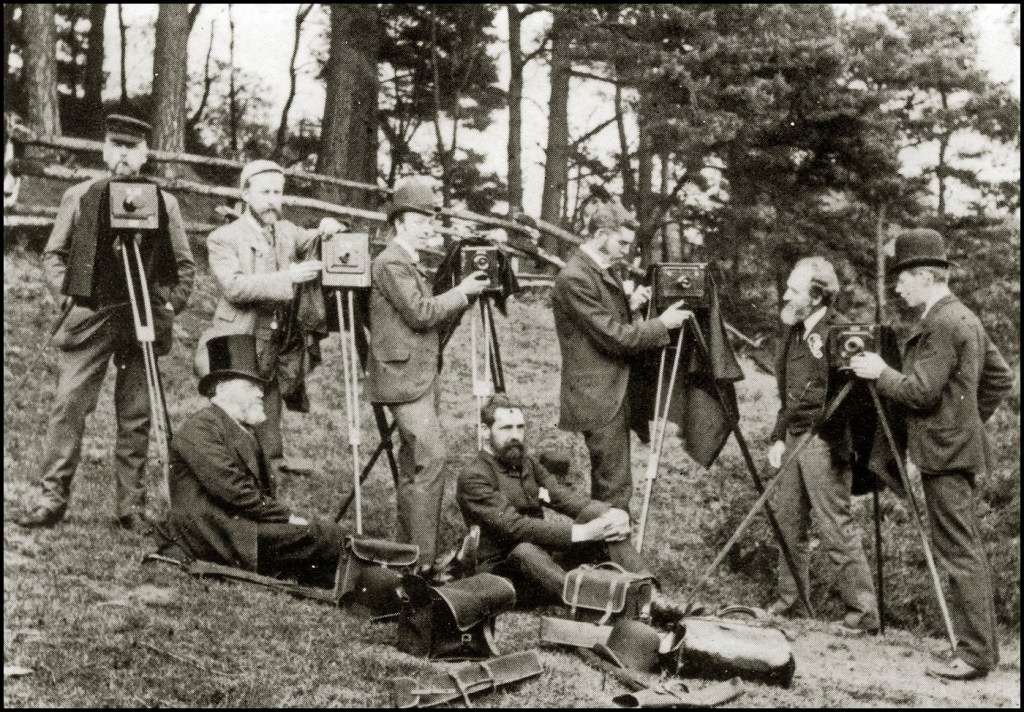 A group of founder members on an outing circa 1907. The head and photo gear may have changed but the enthusiasm and camaraderie remains.

The inaugural meeting of the then Kidderminster and District Photographic Society was held at the Coffee Tavern in Vicar Street on 26 October 1906 where Mr M Tomkinson was elected as the first president.

Remarkably, the original Society minute book from the 1906-1913 membership period has survived.  It provides a fascinating historical insight into the early membership and their activities.

Right from the outset, meetings were held on a Monday evening and this remains the case today, the Club now meeting at St Barnabas’s Community Centre.  From December 1906 the Society met at the former School of Art and Science until, in July 1907, it moved to the rear of 21 High Street.

Early meetings were formal affairs where commonly, a hearty vote of thanks was given to the lecturer for the evening and to the “lanternist” for operating the very early equipment to project lantern slides.  Meetings heard about the wide variety of techniques for producing pictures, saw slides and prints on many different subjects including views of the Kidderminster district, which are still covered today.

It has been said that the camera never lies.  Nothing could be further from the truth and much nowadays is made of all the effects that can be created with digital photography.  In November 1908, the Society heard how adding sky or cloud effects could improve a view.  So there is little new that has not been done before.

At the first general meeting of the Society in 1906, there was a debate about whether to allow ladies to become members.  It is difficult to imagine such a debate nowadays but fortunately, membership to ladies was agreed.  The Society held its first public exhibition in March 1909 with over 100 pictures.  By the late 1930’s, the Society had over 100 members and was one of the largest in the Midlands.  The annual Exhibitions had become major events, opened by the Mayor and receiving extensive local newspaper coverage.  Kidderminster Camera Club still holds annual exhibitions and there was a centenary exhibition held at the Kidderminster Library Gallery in 2006.

During the Second World War when the Society met in the Kingsley Buildings in Vicar Street, the programme of events advertised the existence of an excellent air raid shelter in the basement.  Whilst the Camera Club cannot now offer such a facility, it does as its early predecessor offer a hearty welcome to anyone interested in photography.

This website uses cookies to improve your experience while you navigate through the website. Out of these, the cookies that are categorized as necessary are stored on your browser as they are essential for the working of basic functionalities of the website. We also use third-party cookies that help us analyze and understand how you use this website. These cookies will be stored in your browser only with your consent. You also have the option to opt-out of these cookies. But opting out of some of these cookies may affect your browsing experience.
Necessary Always Enabled

Any cookies that may not be particularly necessary for the website to function and is used specifically to collect user personal data via analytics, ads, other embedded contents are termed as non-necessary cookies. It is mandatory to procure user consent prior to running these cookies on your website.